CLAIM: The Vanguard Newspaper published a story on Thursday, October 8, that the Academic Staff Union of Universities (ASUU) engaged students in an interactive session on Twitter, asking them the trade they’ve learnt so far in the long break.

On Wednesday a Twitter handle, @ASUUNGR, posted a question asking undergraduate students what they have learnt during the long ASUU strike and COVID-19 break.

“Discussion Time. What trade have you learnt during this long break?” The twitter handle with almost 10,000 followers posted.

The Next Day, Vanguard Newspaper published a story ‘STRIKE: What trade have you learnt during this long break? ASUU asks students’

“The Academic Staff Union of Universities (ASUU) Wednesday engaged students in an interactive session on Twitter asking them the trade they’ve learnt so far in the long break.”

“Reacting to the question ASUU raised on Wednesday, some students responded, positively stating different skills and trade they’ve learnt so far while some criticised the union for asking such a question which they see as a mockery,” Vanguard writes.

The story also appeared on several other blogs including SchoolNGR, and NaijaNewspapers.

ASUU is the acronym for the Academic Staff Union of Universities.

ASUU commenced an ‘indefinite strike’ on March 23 after a two weeks warning strike. The union went on strike to protest the non-payment of its members’ salaries because they did not enrol in the Federal Government’s Integrated Payroll and Personal Information System (IPPIS).

The strike was still on when the government announced the closure of schools to curb the spread of COVID19.

Although the government has approved the reopening of schools, federal universities are yet to re-open as the strike still lingers.

Although the short bio of the handle did not suggest it to be that of ASUU, its name ‘Official_ASUU’ suggests so. 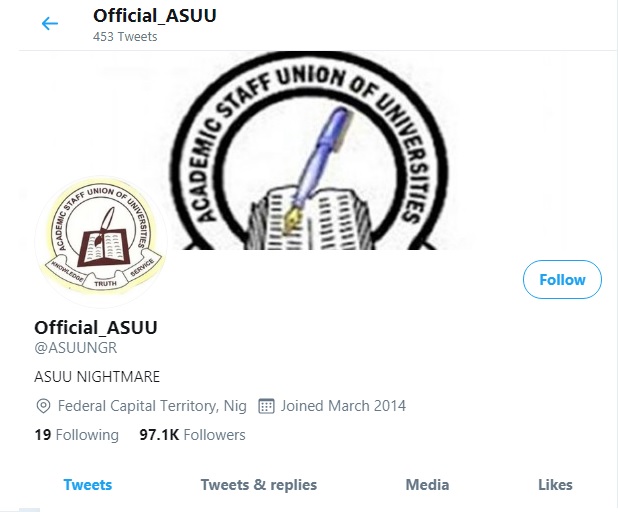 However, ASUU President, Professor Biodun Ogunyemi, confirmed to Dubawa in a text message that ASUU does not have a twitter handle. He described the operators of the handle as impostors.

"No. ASUU does not have a twitter handle. The operators of the twitter handle are impostors. Please don't do anything with them. Thank you. Biodun Ogunyemi." ASUU President wrote in a text message response to Dubawa's enquiry.

Meanwhile, the union had in a statement in August distanced itself from the said twitter handle and all social media handles.

The disclaimer came after a backlash from a tweet by the same handle ‘@ASUUNGR’ which contained a typo, theGuardian reported.