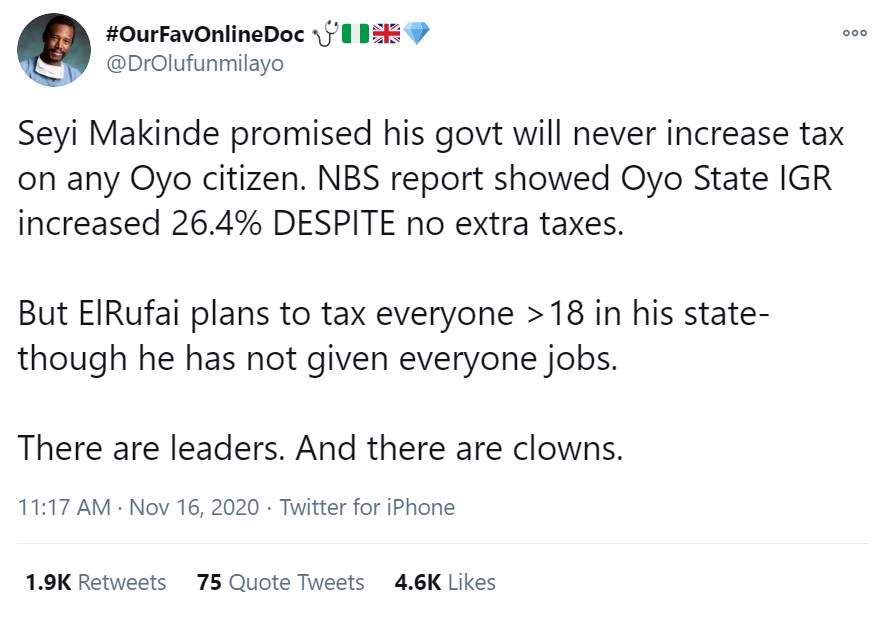 A popular medical doctor and social media influencer, #OurFavOnlineDoc (@DrOlufunmilayo) on Monday said that Oyo state IGR increased by 26.4% without increasing taxes. He also claimed that Governor Nasir el Rufai of Kaduna state plans to tax everyone above 18 in his state.

But El Rufai plans to tax everyone above 18 in his state- though he has not given everyone jobs.” he wrote in a tweet

CLAIM 2: Governor Nasir el Rufai plans to tax everyone above 18 years in Kaduna

Internally Generated Revenue (IGR) is the revenue that state governments generate within the areas of their jurisdiction. The various sources of internal revenue available to state governments include taxes, fines and fees, licenses, earnings & sales, rent on government property, interests and dividends, among others.

Although the claimants did not state a period he was referring to, we based our verification on data for the first half (H1) of 2020 given that he made the claim shortly after Oyo State Governor, Seyi Makinde, posted the same claim on his Twitter page. Efforts to make a definite clarification with him was unsuccessful as messages sent to him were unreplied.

"The Nigerian Bureau of Statistics (NBS) H1 2020 report shows that our IGR grew by 26.4% even amidst this pandemic. We did this without increasing the tax burden on our citizens. What we have done so far is to focus on our competitive advantage," Makinde wrote.

However, data from the National Bureau of Statistics show that Oyo state generated N17.7billion in the first half (H1) of 2020, higher than the N14 Billion it generated during the same period of 2019.

Also, according to the National Bureau of Statistics, Oyo state revenue in the H1 of 2020 grew by 26.4% compared to the same period in 2019. 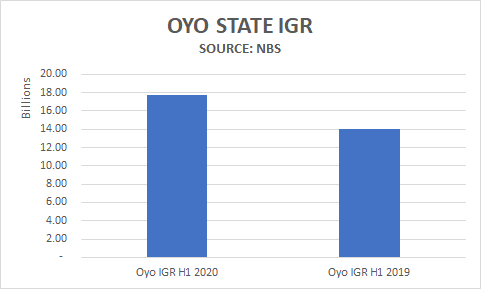 CLAIM 2: Governor Nasir el Rufai plans to tax everyone above 18 years in Kaduna

Later, in an interview with DailyTrust, the executive chairman of KSIRS, Dr Zaid Abubakar, said the Economic Development Levy which the organization will begin collecting from residents in 2021 will motivate the people to be entrepreneurs instead of staying idle.

This Fact Check is produced per the Dubawa 2020 Fellowship partnership with Vision FM to facilitate the ethos of “truth” in journalism and enhance media literacy in the country.