But what should be a few journeys of a few steps has turned into a stretch of kilometers he journeys every day, without additional compensation. 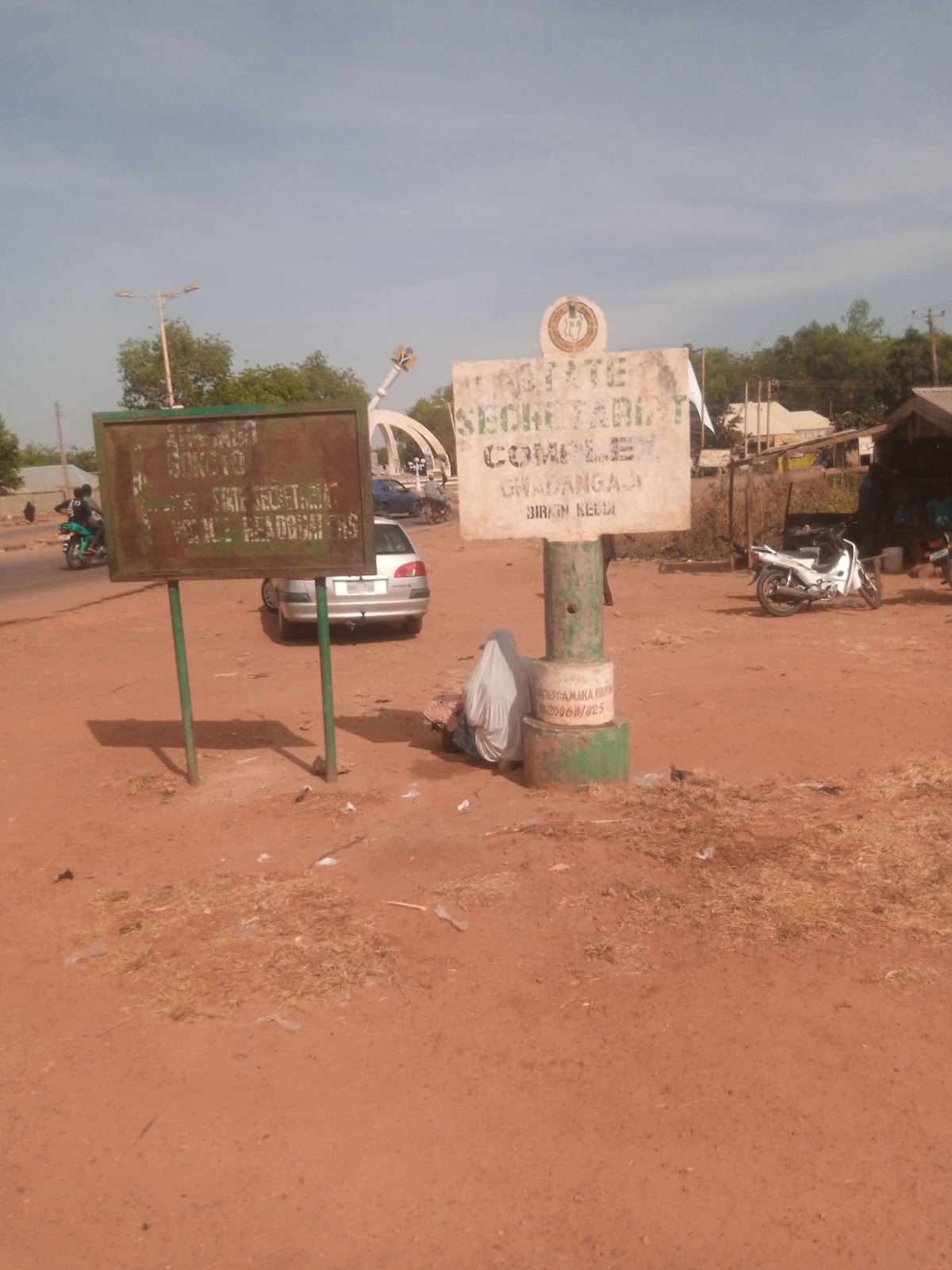 This is because in Kebbi state where Mr Usman works, there's no single Secretariat that accommodates all government officials. Instead, government offices are flung across different parts of Birnin Kebbi, the state capital, with up to 10 kilometers between them in many cases.

Apart from slowing down the pace of work, Mr Usman said the phenomenon is successful in gulping a substantial part of his earnings.

"This is the main reason why my salary cannot cater for my basic needs, that I have to engage in other menial work to survive," he said.

In 2012, the then Kebbi state governor, Saidu Usman, attempted to unify all government offices with the construction of a secretariat. He awarded the construction to RockWell Development Nig LTD at an initial cost of N3.8 billion, to be completed in two years – by 2014. 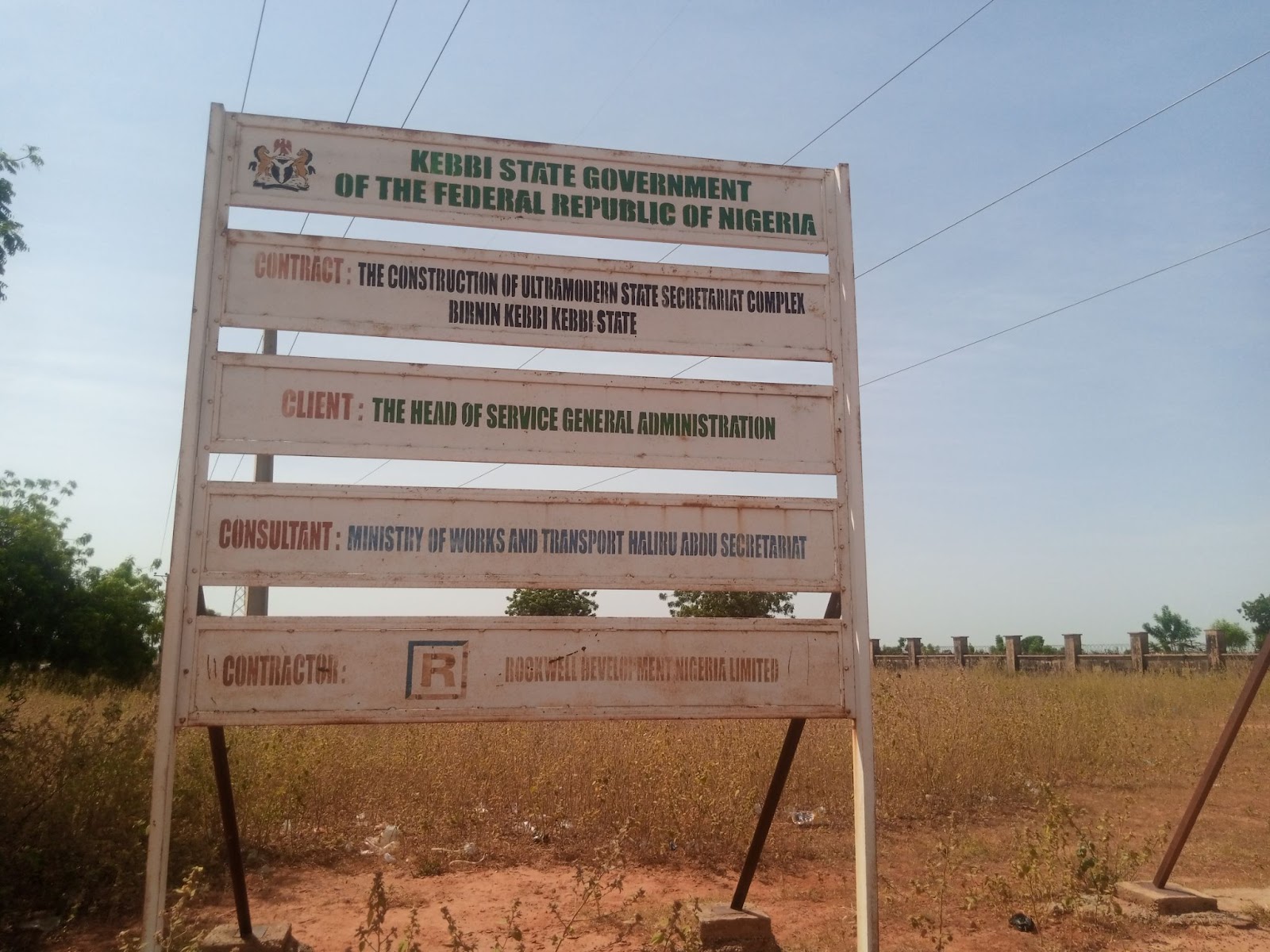 Signboard of the project

At the time and as it is presently, there's a distance of about 6 to 10 kilometers between Kebbi state MDAs whose activities usually overlap.

When completed, the secretariat will accommodate all MDAs including offices of the head of service and secretary to the state government, the governor said at the time.

But in November 2014, at a 50 per cent completion, the contract was reviewed upward to N7.7 billion, at the request of the company. 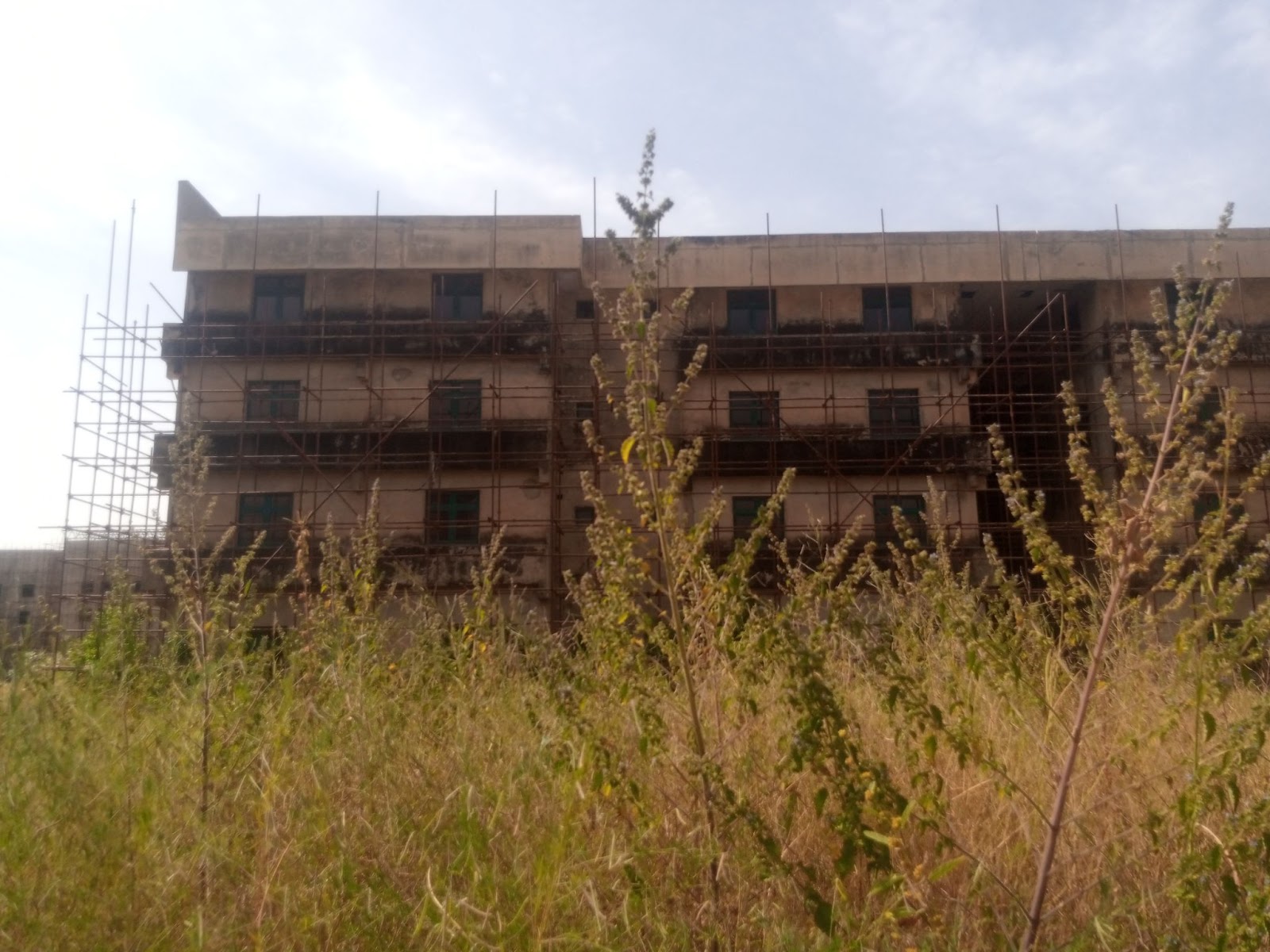 The construction company handling the project, RockWell Development Nig LTD. sought for the contract sum to be reviewed for the second time, which the state government rejected.

But in 2020, Governor Abubakar Bagudu acceded to the company's request to review negotiations and released N949.1 million to the contractors, according to a statement by the governor's special adviser on Media, Yahaya Sarki.

Mr Bagudu's commissioner for works and transport Abubakar Ladan, was quoted to have directed the company to complete the work without delay and vowed to complete the project.

In June, however, Mr Bagudu's government revoked the contract from the company on the account that the company had failed to commit to the project two years after receiving N900 million. Efforts to get the commissioner for works to clarify whether the company has refunded the funds proved abortive. He stopped responding to calls and text messages for further clarifications from our reporter.

On a certain Wednesday in November when our reporter visited, the security guard on duty at the building was unavailable, leaving the site unattended to and giving an unhindered entry to the reporter –and anyone who cared to access the building.

The four storied group of buildings stood alone along the Sani Abacha bye pass in Birnin Kebbi. The brick-fenced buildings have four blocks of office buildings, a conference hall, a restaurant and a mosque.

Our reporter also found that the abandoned secretariat filled with bushes is currently the residence of one of the security guards.

The middle-aged security man, his wife, at least two children, and his herds have turned a part of the building behind the mosque into a home. 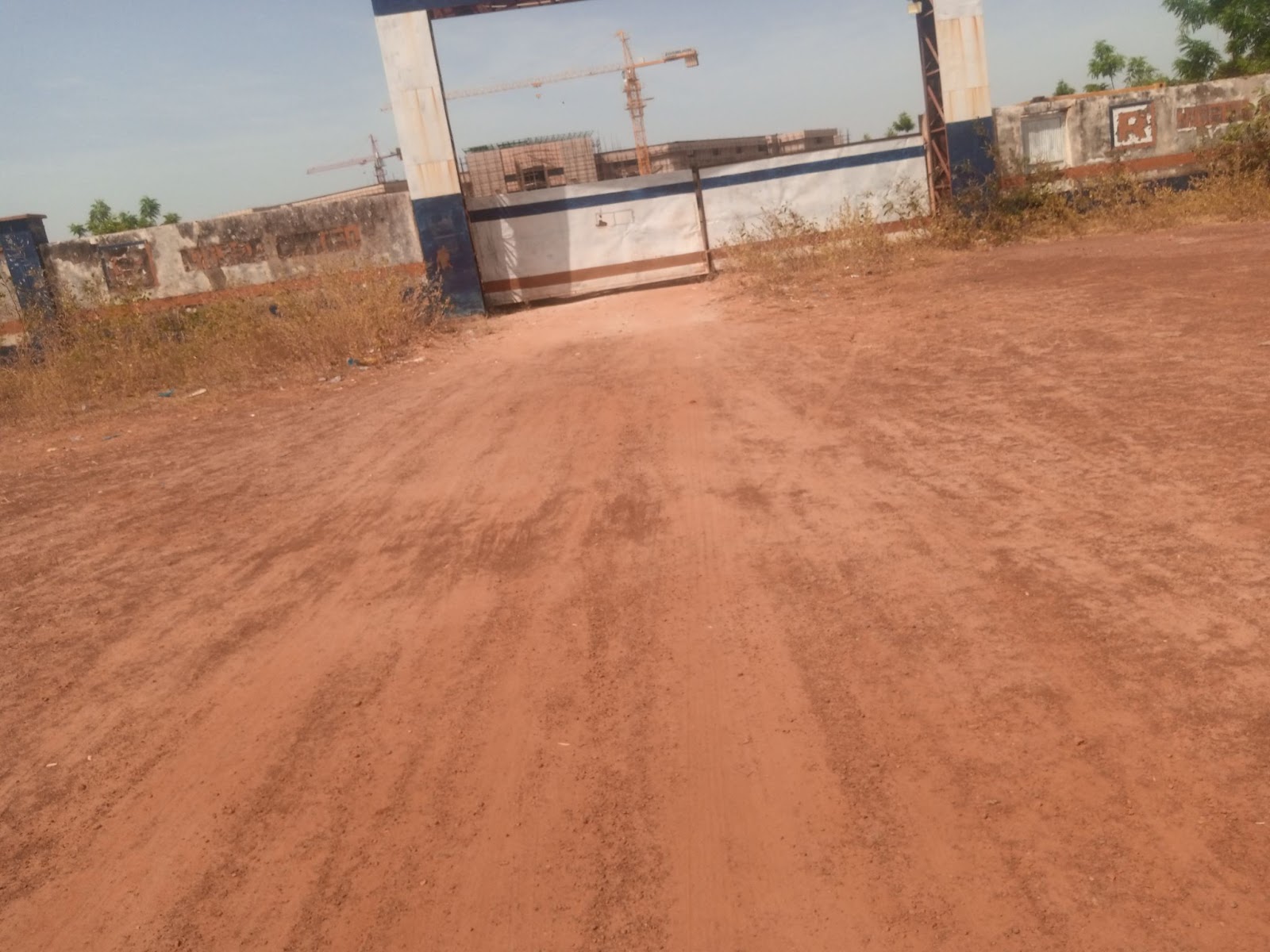 Gate of the abandoned secretariat

When the reporter was about to leave, the middle-aged security guard who claimed to be on night shifts approached our reporter, demanding who he is and why he accessed the building without permission. But before the reporter could identify himself, he interjected with another conversation.

He lamented that his colleague who was on afternoon duty always left his duty posts, making way for all kinds of people to access the building.

According to him, that was how one of his goats was stolen from the premises.

When our reporter approached RockWell Development Nig LTD, the company said it has discontinued the project as a result of the government’s failure to review the contract sum.

In a telephone conversation with our reporter, the company spokesperson in Kebbi, Muhammad Nasir, said the company insisted on an upward review of the sum after considering the inflation of in prices of materials.

"We refused to go back to the site, as Atiku Bagudu’s administration refused to review the contract for the second time as requested by the company which resulted from the current inflation," he said.

Kebbi state Commissioner for works and transport, Abubakar Ladan, confirmed the differences between the government and the company.

He said the company, instead of mobilising workers after the payment of N900 million, is demanding another upward review of contract sum, which he said the government will not succumb to. 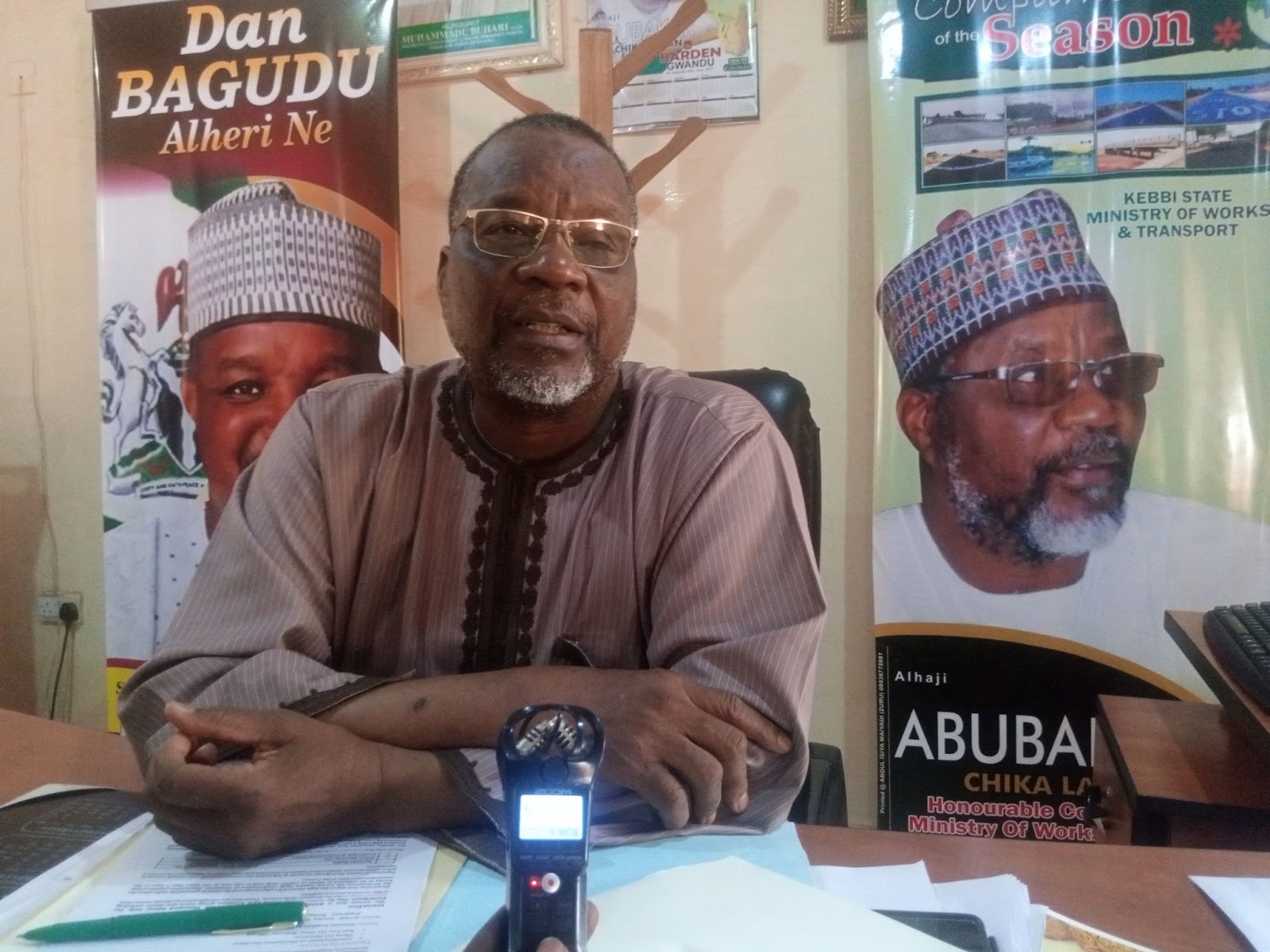 “Few months after the renegotiation for the completion of the project, the company refused to go back to the site but only to come back asking for a review of the contract for the second time," said Mr Ladan.

"After looking for the aspect we discovered that the money is sufficient for the completion of the project, because until now the rate given to him is still higher than the normal contracts which were given for the contraction of similar projects like hospitals, education among others."

Media reports showed that the Kebbi state government had revoked the contract in June.