As part of its Economic Sustainability Plan (ESP) to cushion the effect of the Coronavirus (COVID-19) pandemic in the country, the Federal Government launched the Transport Track of the Transport and Artisans scheme under its Micro, Small and Medium Enterprises (MSMEs) Survival Fund, in December 2020.

The Transport Track is targeted at beneficiaries in each state across the country, including the Federal Capital Territory (FCT), and is expected to provide a one-off grant of N30,000 each to qualified individuals operating in the transport sector.

This investigation reveals that Inadequacy and secrecy marred the entire process in Sokoto - from selection, registration to payment. Also, many whose names were captured never received the payment.

By January 2021, Abdulaziz Abubakar was already having sleepless nights, not knowing how to pay his COVID-19 lockdown-induced debt. For seven years, Abubakar rode a tricycle popularly referred to as ‘Agwagwa da buje’ in Sokoto, and never found himself in debt until the pandemic hit and disrupted his earnings. 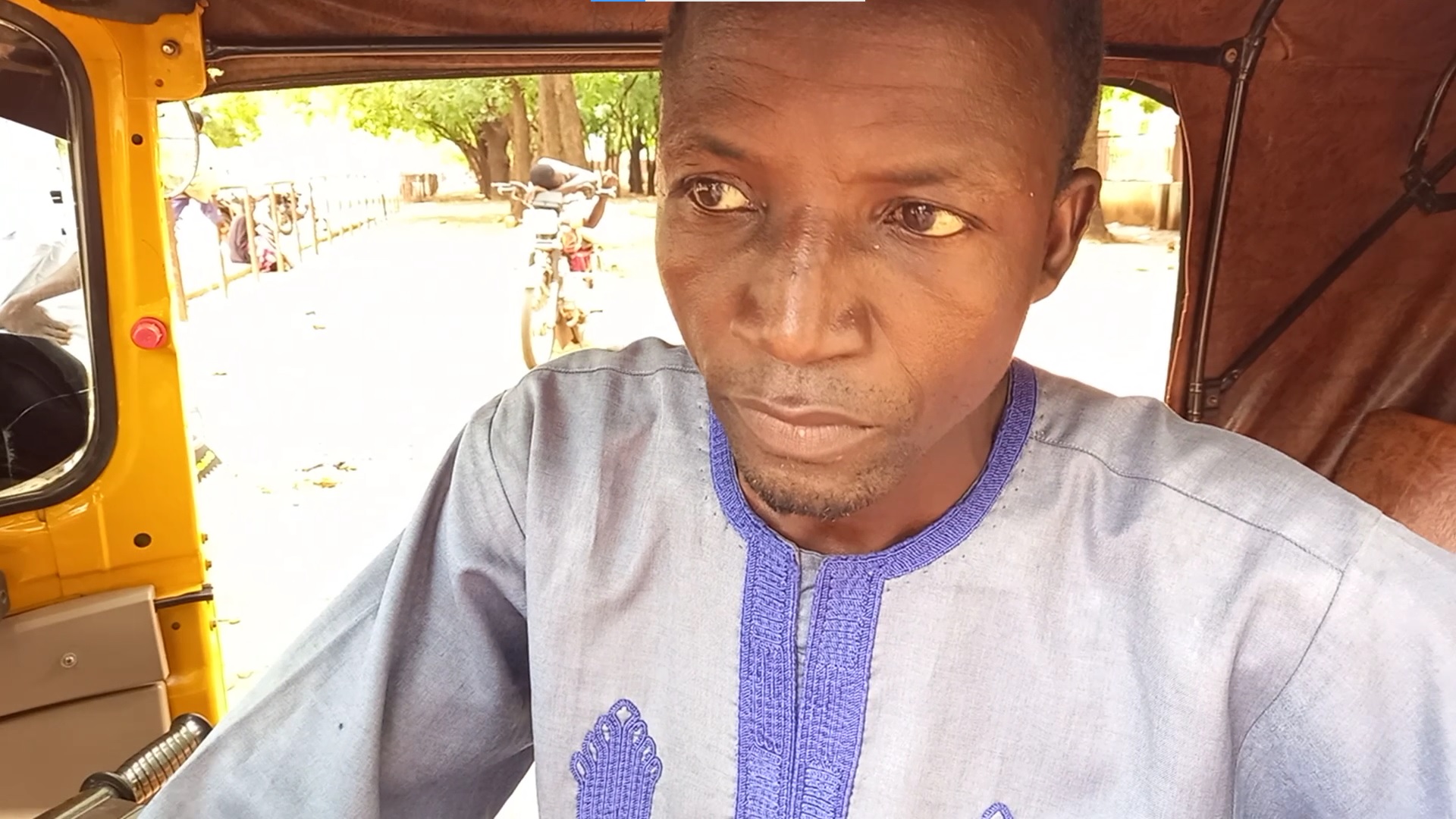 Abdulaziz Abubakar, hoped to benefit from the FG’s N30,000 grant for transporters but he never received it. Image Credit: Qosim Suleiman

Towards the end of 2019, Abubakar got a new tricycle on hire purchase. He is to pay N20,000 to the owner every 10 days for 18 months. But six months into this deal, Abubakar was already accumulating debts as the effects of the COVID19 started manifesting on his business.

First, it was the shutting down of Schools by the governors of the Northwestern states - including Sokoto - to keep students, who are mostly Abubakar’s customers, safe. Then came the Sokoto State government’s 8.00 pm to 6.00 am curfew, which further worsened business and, by extension, his finances and ability to pay for the tricycle he took on lease.

So, as days, weeks and months went by, his debts kept accumulating.

In December 2020, to the delight of all transporters, the Federal Government launched the Transport Track Fund under its Micro, Small and Medium Enterprises (MSME) Survival Fund for transporters. The scheme will pay 4,050 transporters in each state a one-off grant of N30,000.

Those marked to benefit from the first track of the survival fund include Rideshare drivers (Uber, Bolt, etc.), Taxi drivers, Bus drivers, Keke Napep riders, Okada riders, and cart pushers among others, according to a statement from Laolu Akande, the Senior Special Assistant to the Vice President on Media & Publicity.

When the news reached Abubakar that the Federal Government will be supporting transporters with an N30,000 one-off grant to ease the economic effects of the COVID-19 pandemic, he, like many other transporters interviewed for this report, believed it was a scam.

But his hope renewed and he became optimistic when the chairman of Keke Napep Riders Association in Sokoto, Yusuf Shehu, informed his members - including Abubakar - that the Sokoto State Ministry of Commerce and Industry had reached out to the association requesting details of its members so as to include them as beneficiaries in the programme.

On January 17, the Federal Government said a total of 155,920 beneficiaries had been approved for payment, adding that only 9,109 are still pending payment.

It has been over six months since the filling of forms and the verification process, and Abubakar still checks his phone whenever it beeps, hoping it is the ‘promised’ N30,000.

“I was so sure I would get that money that I celebrated. But it’s been silent all along” he said in an interview in July.

The Sokoto office was asked to share the 4,050 beneficiaries among the four unions - NURTW, NARTO, RETAN, and ACOMORAN.

A total of 700 slots were allocated to NURTW and 600 to NARTO, RETAN and ACOMORAN, according to the focal person for the Social Investment Programme in Sokoto, Abubakar Binanchi, who spoke to this reporter at his office.

According to Abubakar Binanchi, Motorcycle Riders Association, which has the highest number of members, received 500 slots, while the remaining 1,050 slots were allocated to truck drivers and truck pushers.

When individuals at the ACOMORAN office began receiving the payment of the one-off grant from the federal government, Mary Ochigbo, the secretary at the office was surprised that she did not receive it. 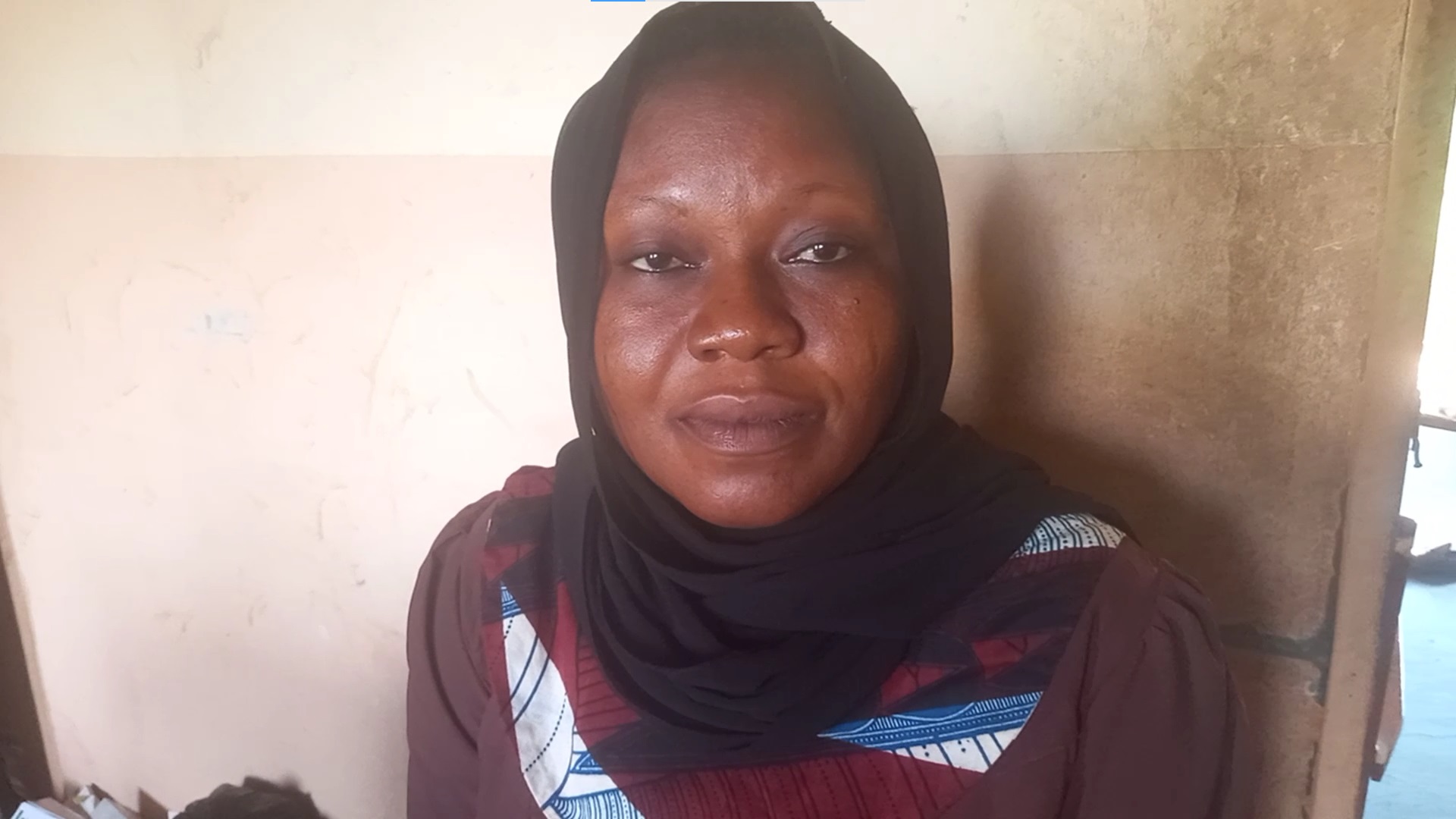 She waited and checked her account balance multiple times, but it never came. Ochigbo said she was particularly distressed because, as a secretary at the office, she worked for long hours to make sure the list was compiled on time and correctly. Ochigbo’s expectation, perhaps, exemplifies the confusion and lack of understanding surrounding the scheme. For, as a secretary in the union office, she is not qualified for the stipend as it is meant for only transporters.

Unlike Ochigbo, though, Yaro Hausare, Maniru Madawaki, Bello Aliyu and Aminu Aliyu Kofar Kade who are also members of the ACOMORAN received the N30,000 one-off grant.

Faruk Kabir, the Secretary ACOMORAN, confirmed that some of their members received the one-off grant, but many others, whose names were captured, did not receive it. 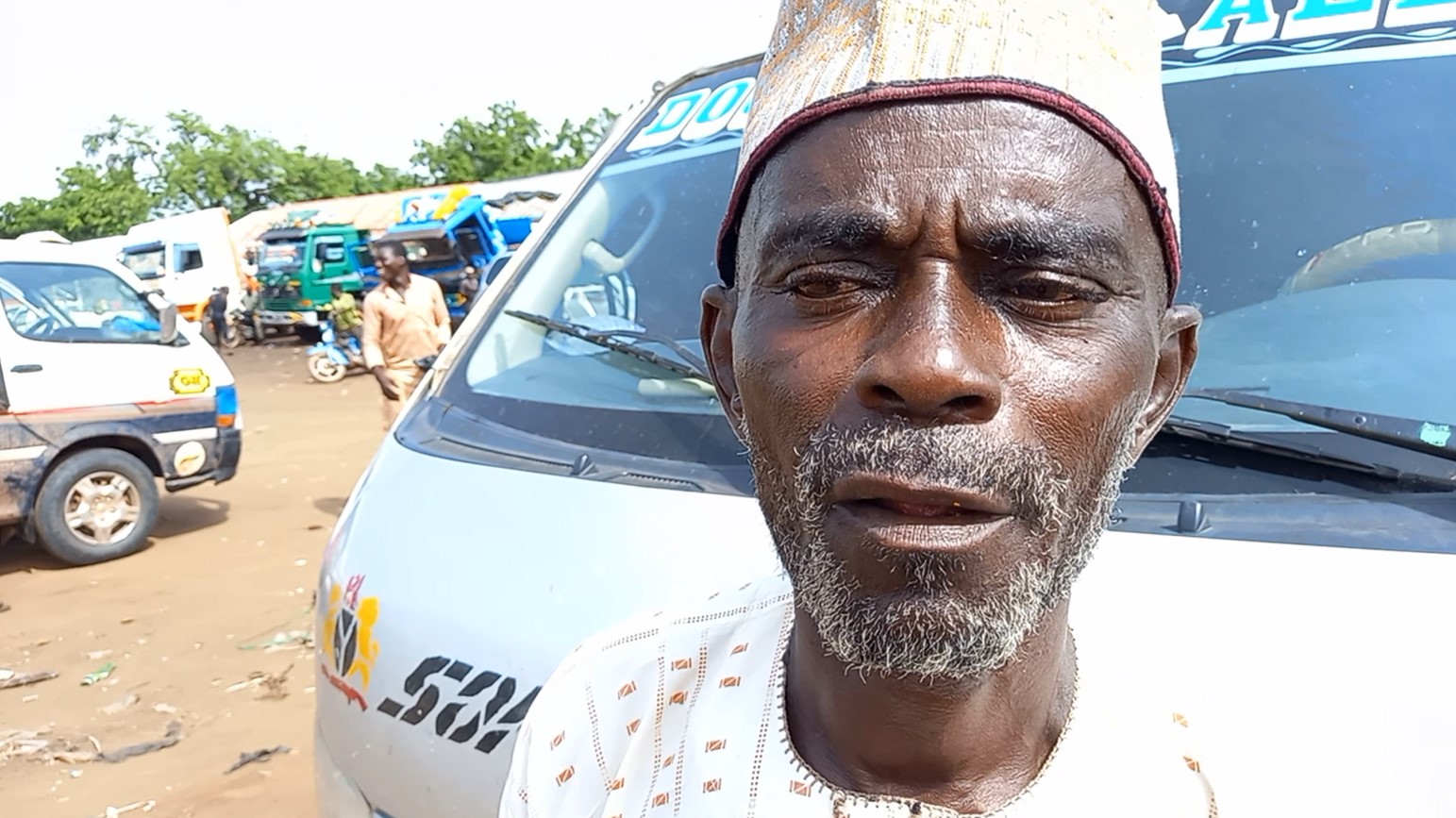 At some point, Shehu Balarabe, 52, a driver in Sokoto Central Motor Park, said he was almost depressed, having to resort to seeking assistance from his relatives who also had barely enough to feed themselves during the COVID19 lockdown.

With 9 children and 3 wives, Shehu said Garri became the food of choice for his family, not because they wanted it but because it is all they could afford.

Shehu’s name was captured in a 20-man list by his branch, his details were captured at the state council office and he received the N30,000, he told the reporter.

Muhammadu Danbakiri and Danjummai Isah Bado, a bus driver who doubles as the treasurer of his unit, said they both received the N30,000 grant.

Sabo Sarki, 45, is a father of six, a husband to two women and the sole breadwinner for his family. He’s been a bus driver for over 20 years, a profession he used in catering to the needs and wants of his family. 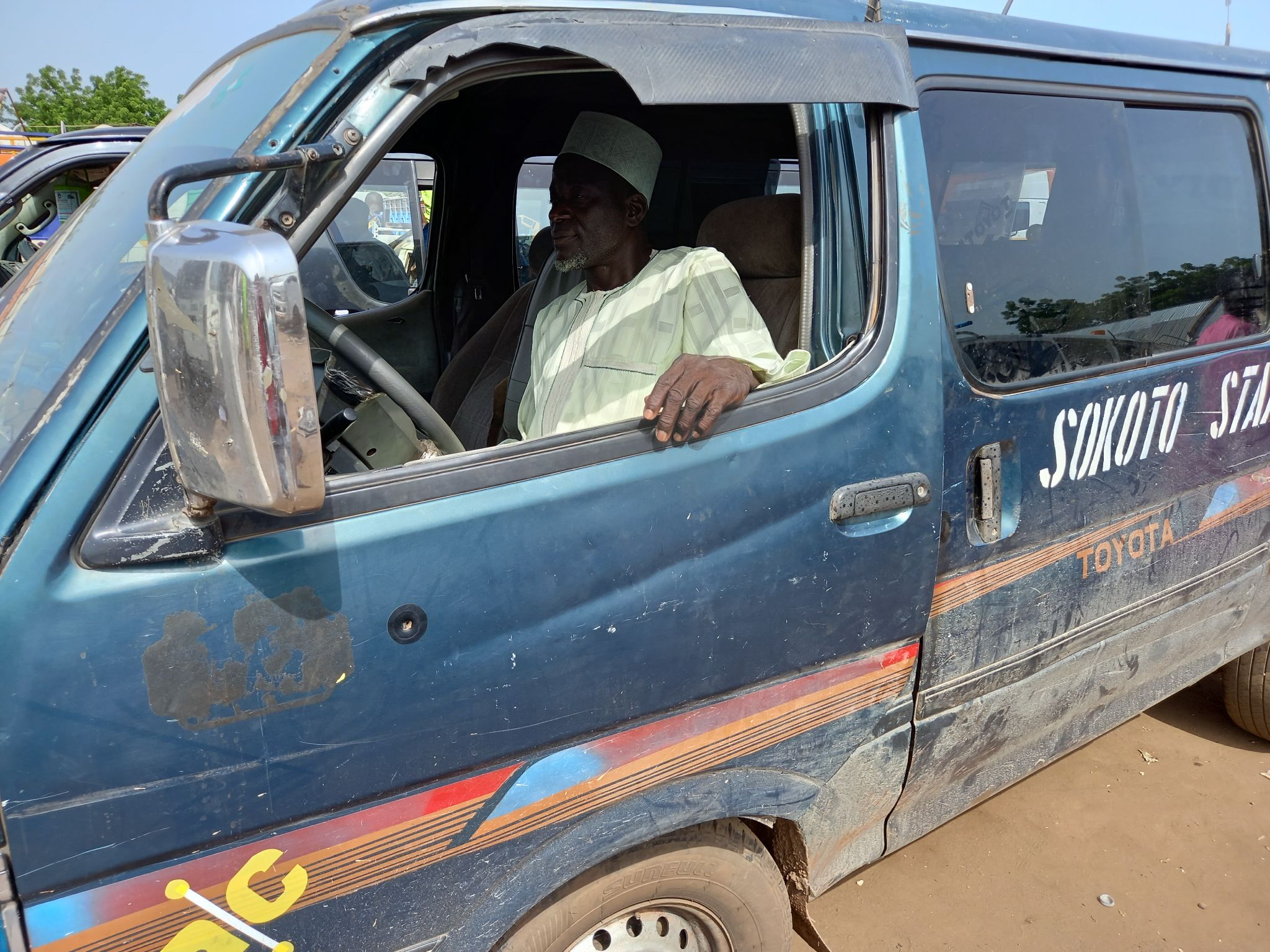 In April 2020 when the number of coronavirus cases in Nigeria rose above 800 and casualty pegged at 28, the Nigerian Governors Forum (NGF) agreed to place a ban on interstate travels. This lasted till the end of June when the Presidential Task Force on COVID19 ‘partially’ lifted the ban.

With the ‘partial’ lifting of interstate travel, Sarki had to follow COVID19 protocols of carrying half the capacity of his bus.

Within this period, the father of six said, for the first time in his life, he accumulated a debt of over N140,000, due to financial incapability.

“As I speak to you, I am still yet to pay up to half of the total amount of the debt incurred,” he said.

Sarki’s name was captured in the first list of 73 people captured by his unit --Sokoto Central Market Bus Service -- to benefit from the N30,000 one-off grant. But the state council rejected the list saying only 20 members can benefit from the unit. Still, his name made the new list and he was part of the verification exercise that took place at the NURTW state council office. However, he is yet to receive the one-off grant.

Of the 20 names captured in the list, only 8 of them received the one-off grant, says the Chairman NURTW Bus Service, Sokoto Central Park, Mustapha Ladan Bodinga, whom himself claimed to not have received even though his name was on the list.

For 18years, Bello Muhammad, 36, who drive a bus for a living said he spent all his savings on feeding himself, a wife and 3 children during the period of lockdown. He hoped to benefit from the federal government’s survival fund having had his details captured at the NURTW state council, but that never happened.

“In truth, I hoped to receive the money and have planned for it, but I didn’t get it. A number of us went for the verification, some of them received the money but I didn’t” he said.

Unlike Abubakar, Ochigbo, Sarki and Muhammad, whose names were captured in the list, Sule Shehu, Muazu Kware and Abdullahi Tanko, drivers at a motor park in Kware Local Government Area, and several other transporters interviewed for this report only heard about the federal government’s plan on the radio or by word of mouth.

Clad in the unmistakable NURTW’s green and white uniform, Abdullahi Tanko Kware, Muazu Kware and Buda, claimed they were never informed about the payment or the process of payment.

Ready to pick up commuters on their motorcycles, Murtala and Surajo Muhammad said they were never informed about the program. Anas Tijjani, a tricyclist, also said he was not aware or informed of the fund.

Although many of them claimed to belong to at least one of the benefiting groups, they were never informed. To them, it was never implemented because none of them, or anyone they know, benefitted from the programme.

On how 500 members were selected from over 5,000 Tricycle riders, Yusuf M. Shehu, chairman, Tricycle Riders Association, said the 500 names submitted were selected based on those available at the time of compiling the names. He said the association selected the names from the list it received from various local governments chapters.

Yusuf also confirmed that some of his members received the grant while others did not. But he did not have a comprehensive list.

At first, when reached on phone on whether the union had benefited from the federal government's programme, NURTW State Chairman, Modin Modi Bodinga, refused to provide an answer, saying he will have to wait for his superiors before he could speak.

At various NURTW parks in Sokoto, all of the chairmen approached in the state capital refused to speak, asking the reporter to approach the leadership of the union.

However, when the reporter approached him at his office, weeks later, Modin Modi Bodinga, the chairman NURTW Sokoto State, who could not provide the number of members under the NURTW, said the names sent were randomly selected from the list sent from different NURTW branches across the state.

According to him, there were no criteria in selecting the 700 requested by the NSIP to benefit from the grant.

He, however, also lamented that not all whose names were included received the one-off grant.

The current secretary of the NURTW claimed to not have details of the entire process as he just resumed duty at the office less than two months ago. When contacted on phone, the former secretary who has been transferred, Rufai Mode, refused to speak, saying he had no information with him as he left everything at the Sokoto office.

Focal Person only a Middle man

When the reporter forwarded questions as to why some are yet to receive payments even though their names were captured, Binanchi said the processing of payment was done at the NSIP office in Abuja.

He said his job was to receive the list of names from the union chairmen and forward them to the National Social Investment Programme Office in Abuja.

He added that the NSIP sent enumerators to Sokoto from the nation's capital to capture the details and verification of the names he sent to Abuja, adding he was never informed about how the payment went and neither did he ask.

"I collected the names, sent them to Abuja and they never got back to me. So, I don't know if they have paid or not" he said.

He also claimed ignorance as to whether the further payment could be processed later.

It's been over seven months, and while some of the 4,050 transporters whose names were in the list submitted and were verified are still hoping that the N30,000 will reach them someday, others have given up.

*This report is supported by the International Centre for Investigative Reporting (ICIR) and the John D. and Catherine T. MacArthur Foundation.