CLAIM: An online medium ObserverTimes posted a story on its website that claims a former Nigerian Minister of Finance, Ngozi Okonjo Iweala, has been appointed for the position of World Trade Organization Director General.

VERDICT: False. The World Trade Organization is yet to announce the appointment of a Director General.

It, however, did not provide details.

“Dr Ngozi Okonjo-Iweala has been appointed as the first female leader of the WTO. Details shortly…” It posted

The post already generated thousands of views on its website, thousands of retweets on Twitter, and hundreds of congratulatory comments to the former Nigerian Finance Minister.

The World Trade Organization (WTO) is an intergovernmental organization that is concerned with the regulation of international trade between nations. The WTO officially commenced on 1 January 1995 under the Marrakesh Agreement, signed by 123 nations on 15 April 1994, replacing the General Agreement on Tariffs and Trade (GATT), which commenced in 1948. The World Trade Organization (WTO) is the only global international organization dealing with the rules of trade between nations.

At its heart are the WTO agreements, negotiated and signed by the bulk of the world’s trading nations and ratified in their parliaments. The goal is to ensure that trade flows as smoothly and freely as possible.

The appointment process of a DG of the WTO is a three-stage one after the nomination of candidates from member countries. It is followed by the screening of candidates to come up with the two most preferred candidates in the last stage.

For 2020, the first stage, the nominations from member countries commenced on 8 June until 8 July. The Organization received 8 nominations.

Between 15 July to 7th September, all of the candidates met with WTO members at a special General Council meeting, to present their views and take questions from the membership.

On 18 September, WTO announced the five of eight candidates for the second stage.

The second phase of consultations began on 24 September and ran until 6 October. During this time, members will be asked to express two preferences to the facilitators with an eye to bringing the number of candidates from five to two.

The First Female DG of the WTO

At the end of the nomination process for the office of the Director-General of the World Trade Organisation in July, eight candidates --three women and four men-- are vying for the top-job of the WTO; three from Africa, two from Europe, one from the Middle-East, one from North America, and one from Asia.

In September, five of them made it to the second stage of the selection process. They are: Dr Ngozi Okonjo-Iweala of Nigeria, Yoo Myung-hee of the Republic of Korea, Amina C. Mohamed of Kenya, Mohammad Maziad Al-Tuwaijri of the Kingdom of Saudi Arabia and Liam Fox of the United Kingdom.

On Thursday 8th October, 2020, the WTO shortlisted two candidates --both female-- for the top Job. It will be the first time a woman heads the organization in its 25 years of existence. The two shortlisted are Nigeria’s Dr Ngozi Okonjo-Iweala and Korea’s Yoo Myung-hee.

The third and final stage will commence on 19 October and run until 27 October “to afford members sufficient time to prepare their positions”, according to information on the WTO’s website. 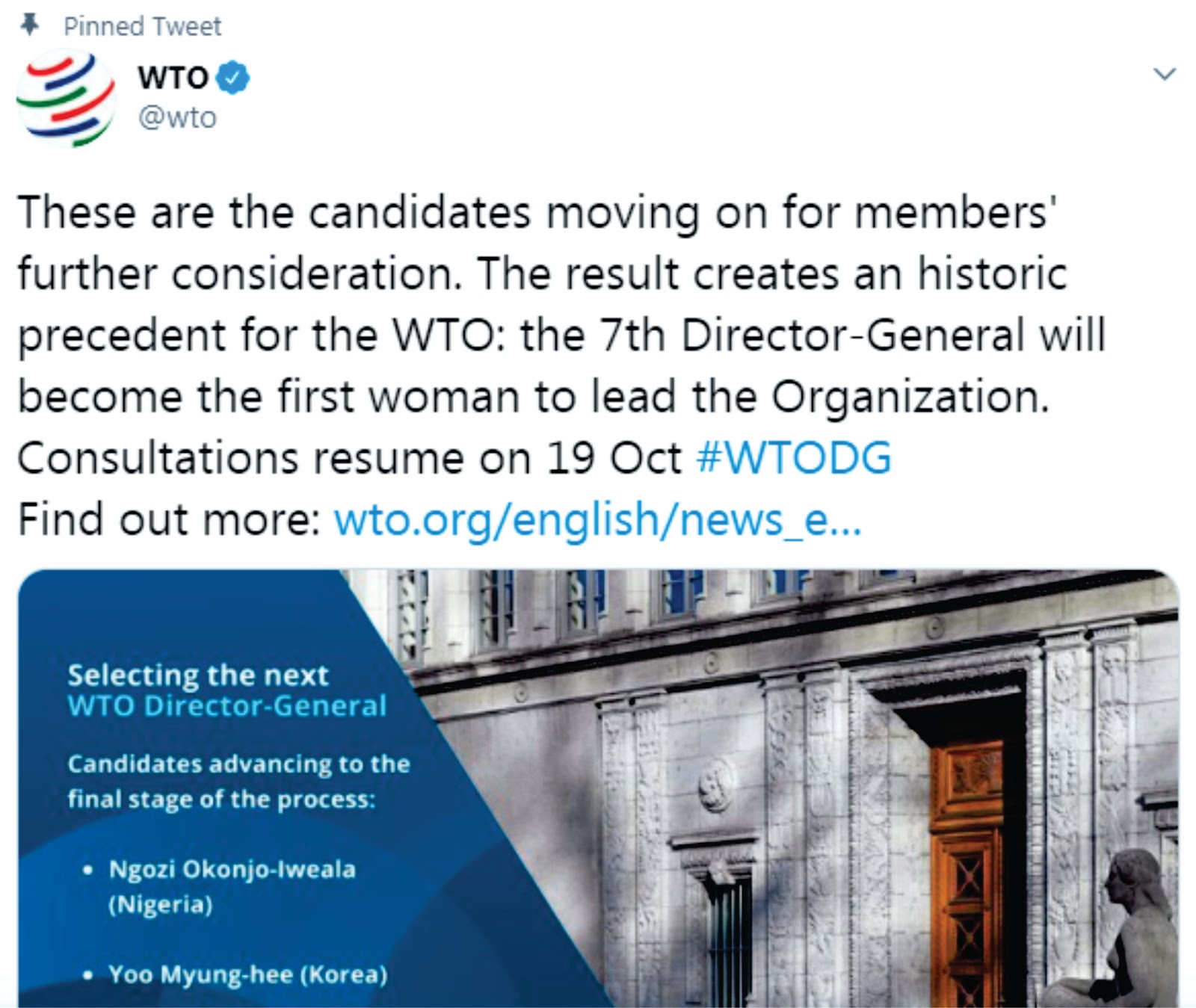 Also the Verified Twitter handle of WTO contradicts the claim that a DG has been appointed.

“These are the candidates moving on for members' further consideration. The result creates an historic precedent for the WTO: the 7th Director-General will become the first woman to lead the Organization. Consultations resume on 19 Oct” it posted on Thursday October 8th.

The claim that a former Nigerian Minister of Finance, Ngozi Okonjo Iweala, has been appointed the World Trade Organization Director General is false. WTO is yet to appoint a DG. Further consultations on the selection of the final two candidates --Ngozi Okonjo Iweala and Yoo Myung Hee-- begin on 19th October.